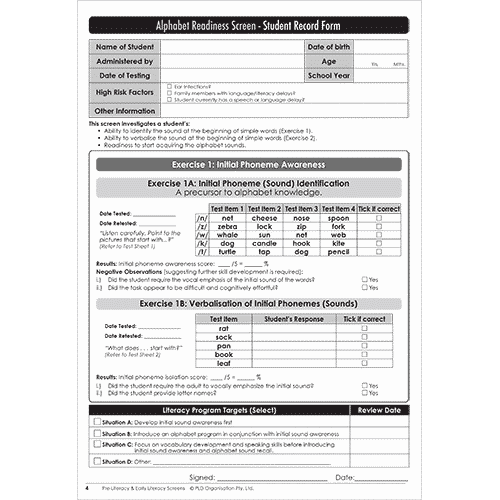 Children require an awareness of the small or individual sounds at the beginning of words in order to be in a good position to start learning the alphabet sounds.

Too often the alphabet is introduced without prior explicit attention to initial sound awareness. As a result of this approach:

Page 5 of the whole school literacy strategy outlines when initial sound awareness should be ideally instructed. The short response is the term before an alphabet sound program is introduced. This page provides a more detailed explanation of how the skill is taught explicitly first, then there is a 1 minute progress check scheduled to determine if this essential skill has been adequately developed for the next area of instruction, the alphabet sounds and blending.

PLD also produces a program (devised by speech pathologists) aiming to prepare ALL students for alphabet success or which can be used for remediation with older students who are already experiencing difficulties learning the alphabet. Learn more about ‘Preparing for the alphabet’.