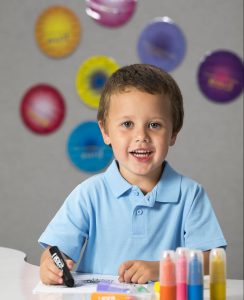 Amongst the many controversial topics in education, the choice between teaching junior primary students to write in either a foundation font or a cursive font, is definitely one of those that sparks debate.

In this article we’ll look at the reasons and research behind the Australian curriculum recommendation that children in Foundation to Year 2 write with an unjoined script.  And then examine the advancements necessary for a student to progress to a joined handwriting style, usually recommended for Year 3. The research and expert opinion can be grouped into three key developmental areas:

Although there is still some debate regarding the fine motor skills involved in print and cursive styles, the research and many Occupational Therapists agree that cursive font requires greater motor coordination and complexity of letter formation. With print (such as foundation font) each letter is isolated, it’s shape stable and the pen lifts between letters allow planning time, whereas cursive is more difficult to master (Poudou, 2018; Bara & Morin, 2013).

Occupational Therapists explain that a cursive tick (that is the final aspect of letter formation in cursive fonts) is quite a mature controlled movement and often an inappropriate expectation for young students. What you will frequently observe is young students finishing letters with a large or elongated tick, rather than finishing letter formation with a small and controlled tick. You may also observe students forming the letter and then after taking their pencil off the page adding the cursive tick onto the end of letters in a secondary movement.

Hence from an Occupational Therapists point of view, foundation font is recommended, as  introducing cursive font too early will challenge students and may result in a negative impact on their posture and pencil grip.

Most text and educational support resources that students’ use in the classroom are presented in print.  Print fonts are more closely related to foundation font, rather than cursive script.

From a literacy point of view, this can add complexity for young students.  We are asking them to master both a reading font (typically a foundation font), AND a spelling and writing font (cursive). This complexity is amplified when dealing with certain letters (e.g. p, r, and b) as their shapes vary significantly between foundation and cursive fonts.

Additionally, the most recent research suggests that cursive font is much harder for dyslexic students as it is more complex. Each letter is connected to the next in a word, so students have to not only form the letter but consider what letter is coming next so they can join them correctly.

By using foundation font as a consistent text across reading, writing and spelling it simplifies the start of their literacy journey.

Speed and Automaticity of Writing

When we teach handwriting, our ultimate goal is for students to automate their handwriting so they can write with speed and accuracy and focus on the task of sharing their ideas through written composition.

What’s interesting is that the research is inconclusive whether this speed and automaticity is best achieved with either print or cursive.  In fact, much of the research is reluctant to recommend one style of handwriting over another. However recent studies of older primary students have shown a mixed style of print and cursive is faster and equally legible as either cursive or print (Bara & Morin, 2013).

As Bara and Morin (p.614) concluded, students will eventually develop their own style often combining letters from different writing styles and perhaps teachers should not “insist on a strict adherence to a particular model.” Professor of Education Psychology at the University of Washington, Virginia Berninger suggests “evidence supports teaching both formats of handwriting and then letting each student choose which works best for him or her” (2012, p.31).

So what font to teach?

At PLD, our position is always to suggest a foundation font from the Early Years to Year 2 and thereafter a cursive font.  We believe that this sequence gives students the best opportunity to establish confidence in literacy and fine motor skills allowing them to gradually develop speed and their own style.

Bara, F. & Morin, M. (2013). Does the Handwriting Style Learned in First Grade Determine the Style Used in the Fourth and Fifth Grades and Influence Handwriting Speed and Quality? A Comparison between French and Quebec Children. Psychology in the Schools, 50(6), 601-617.